A book filled with self-healing and sacred truths, “Her Brave Journey” is a novel which seeks to inspire, empower, and strengthen the soul. “Her Brave Journey” tells the story of Kiara, a South Asian American woman, who is a survivor of many adversities. From the first moment we meet sweet little Kiara, there is a forceful want to protect her as she navigates bullies and racism, too afraid to speak out. Despite these tough experiences during her childhood, we see Kiara grow into a fierce, independent woman.

Everything looked bright, until she had to navigate a cycle of abuse and manipulation after marriage. On multiple occasions, she is almost killed by the man who claimed to love her. During those almost final moments, her voice was hoarse and robotic from the strangulation. When her entire life was flashing in front of her eyes, the only images she saw were of her mother and father. After a brutal period of therapy and much introspection, it is only later in life when she finally understands that despite her tough experiences, there is a lot of love, compassion, and forgiveness in the world.

During her spiritual journey, Kiara seeks the strength to challenge the patriarchy as she recognizes the pretense of the “white picket fence” dream, and she dares to defy society’s expectation that marriage and children are the only measure of happiness and prosperity. Gradually, she realizes that despite being thrown to the wolves many times, she has fiercely and single-handedly protected herself time after time. She is braver than she thinks.

Kiara does some soul searching by visiting a wellness retreat in India, where despite feeling detached from God, she feels attached to spirituality and starts questioning the mysteries of religion and karma (both the good and the bad). For example, why does reaping the fruits of good karma always take longer to catch up to her than the mistakes of bad karma? Or do humans carry some positive and negative energies from the karma of our previous lives as well? These are questions that many of us have also wondered about our own lives.

“Her Brave Journey” is my first published novel and a fictionalized account of the stories I have personally gathered from others with the hope of providing a voice to anyone who has not yet found the courage to speak. I decided to write this story because many women, especially those of South Asian heritage, will see a part of them, in Kiara.

April is sexual assault awareness month and in today’s #MeToo era, the topic of domestic abuse is still obscured in the South Asian community. Kiara, a member of this community, is stuck in the vicious and confusing cycle of abuse. By sharing examples of the cycles she keeps rotating in and describing the common symptoms she shows of The Battered Woman Syndrome, her story will resonate with many women out there.

I have also included a chapter about The Cycle of Abuse and The Battered Woman Syndrome with charts and graphs. These charts and graphs were developed by Clinical Psychologist, Dr. Lenore Walker (https://www.drlenoreewalker.com/) as part of her research on the topic of violence against women.

Her Brave Journey is a beautiful story of a strong, confident, survivor. From a shy child to a naïve young adult, and ultimately a fierce, successful woman….Go inside the life of Kiara and follow her brave journey as she reclaims her life and discovers her inner warrior. 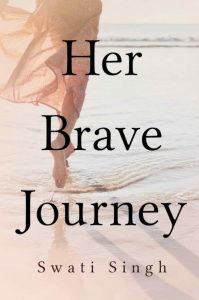